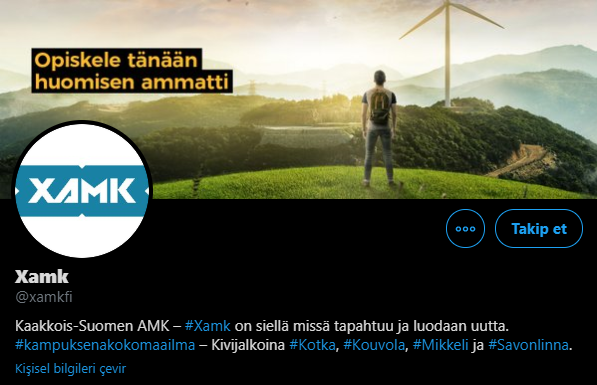 Same things can be said for twitter account. It is in Finnish, it is most likely to give insights about what is going on and what is being done in our school. This is a way to use social media but as I wrote last week, it can be used on more convenient. Social media should be to reach out to more people.

How can we do it in twitter? Twitter is different from instagram. It is more professional and companies use it a lot more often. Schools use it to give information to their students. I checked few Turkish schools on twitter and they talk about different things. But there are more things happening there I would guess. For example, every sports event that the school is participating, they let people know through twitter. Football games, Wrestling tournaments, swimming races etc. Since almost everything is in Finnish, I did not understand what they mean and I did not translate. There was 1 post from 30th January in English and it was about #SportsInfoDay. Usually there was about 3 posts per day but this event was mentioned once. One could say it’s pretty passive.

How can it be done? I can have an example with the same topic of last week. Our main point is to make social media accounts more convenient and make it possible to reach out to more people through it. As an example from past, Turkish football player, Arda Turan, used his team’s twitter account for 1 day. The team is FC Barcelona and instead of his own, he uses the team’s official account and likes Turkish things, retweet Turkish stuff. and this has been on the agenda in Turkey for few days. Just by letting the player use the account, FC Barcelona made tons of interactions in Turkey. For our school, a Vietnamese student could use it for a day or 2 and make posts in their language and make people see that our school exist through them. To clarify, nothing politic should be shared or said.

When there is an event in anywhere in the world, there should be something in there. For example, recently, we lost Kobe. Respect. There is no post about this. There has been earthquake in Turkey, there is nothing shared. Of course, the pain should not be used to get interactions but sharing feelings in this kind of situations is important for everyone and we are not doing it. If these were too far, last week on Thursday, we were on Kouvola city hall for an event with few different organizations. CEO of kouvola lakritsi was there for a speech as well. I do not think this event was shared on twitter. On their defense, maybe they did not know that this event existed but we have no interactions with them so we could not let them know.

This is the last article about this the social media of our school. The reason I wrote these is to give a different perspective about the subject and help to the school environment. The final aim on these ideas is to create a better student profile for this school which is, I suppose, many people’s aim. I think the best thing about this school is how much we, the students, participate on everything and I believe this behavior will also help on this subject as well.