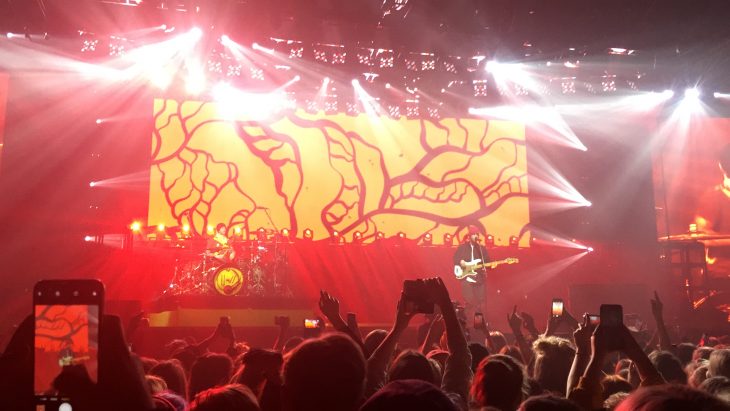 Apart from the excruciating weather or the pressure of deadlines for ~ 4 years straight, studying in Finland does have its own perks. Over two years ago, I went to a Twenty One Pilots concert in Helsinki. Last Wednesday, I went to my second one by them.

I suppose it is safe to say that everyone should go to a concert of some sort at least once in their life. The excitement of waiting for your favorite artist, the pure joy of seeing them in person for the first time, or the indescribable feeling of singing in unison with thousands of other people who share the same music interest; they all contribute to a priceless experience.

My second time going to a concert in Finland was way better than the first one, regarding the preparation step as well as having a company. There was way less of wearing jacket while jumping and singing in a pit full of people for 4 hours and way more bringing enough coins to so that an assuring looking guy would take your clothes for you. The door opened at 7, so me and my friends came at 5:30, since we want to get a good standing spot. When we arrived, the line outside was already super long. Most fans were wearing yellow clothing and/or clothes with yellow tapes on them (it is the theme of Twenty One Pilot’s new album). The line was moving slowly, then it stopped, then it moved again, and stopped again. It was -9 degrees in Helsinki that night, so I could barely feel my feet. But after 1.5 hours, we managed to get inside, and that was when the fun began.

The concert started with The Regrettes – an indie-rock band with a very young vocalist. Their music is not my cup of tea, but they certainly sang their hearts out. After their performance ended, the whole venue was filled with ominous music. Then we heard a bang, and that was when the boys appeared. Lt me tell you, it is absolutely still a one-of-a-kind feeling.

They started with Fairly Local – a song from the previous album. It was a mix of old and new songs throughout the whole show. There were several moments where we did not know where the boys were, since the lights were all turned off, and Twenty One Pilots is known for their performance tricks, which means they could literally appear above your head without you knowing. During slow-paced, ballad-ish songs, we all turned on our flashlights and put yellow notes which were handed to us while we were outside by the fans over them. It created a mesmerizing atmosphere which is like no other.

I almost dropped my phone several times, lost my voice because I was singing so hard, had neck, back and leg pain because I was standing for so long. But it was all worth it. It was an amazing concert, a precious memory that I will keep for life of my time here in Finland.