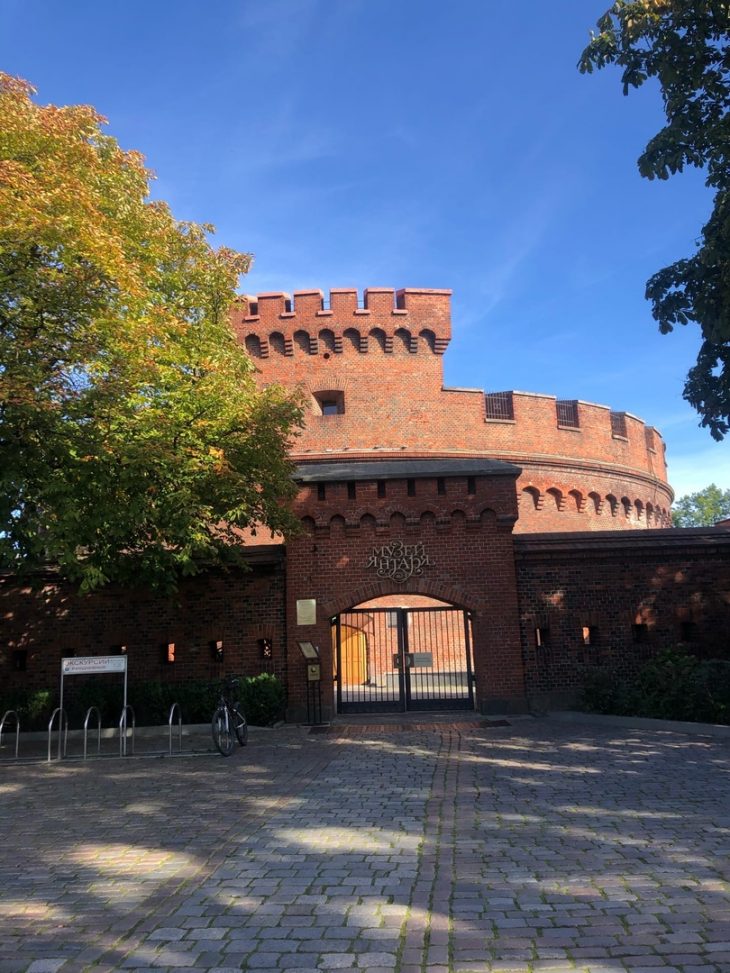 The only Russian Amber Museum was opened in 1979. It is located in the center of Kaliningrad on the shores of Lake Superior in a fortress tower from the mid-19th century.

The tower was built in 1853 under the leadership of the developer of the general plan of the fortifications and was part of the city’s defensive fortifications. It bore the name of the Prussian Field Marshal Friedrich Karl Don, a participant in the liberation war against the Napoleonic invasion. The building is also a World War II monument.

The Amber Museum is a museum of one mineral. The exposition is located on three floors of a building with a total area of ​​about 1000 sq. meters. In terms of content, it is divided into natural-scientific and cultural-historical parts.

What is amber? Why this stone called «sun stone»?

Amber is a fossilized resin of ancient coniferous trees that grew more than 40 million years ago on the modern territory of the Scandinavian Peninsula and adjacent areas of the Baltic Sea bottom. Amber is often called a “sun stone” only because in nature it is most often found in a warm sunny colour.

The exposition contains the largest in Russia “sun stone”: its weight is 4 kg 280 g. And also the world’s largest amber mosaic “Rus’

A significant part of the collection is made up of amber samples with inclusions of the remains of animals and plant organisms that fell tens of millions of years ago in the once liquid and viscous resin. Inclusions in Baltic amber are of great scientific interest due to their diversity and excellent preservation.

The museum today is one of the brightest cultural places in the city. Its collection numbers about 16,000 items. More than 200 thousand people visit the museum every year, 1200 excursions are held, more than 30 exhibitions and projects are organized.

A significant part of the exposition is the work of contemporary artists from Russia, Germany, Denmark, Italy, Latvia, Lithuania, Poland, USA, France, Japan. Among them are jewellery, sculpture, interior objects.

Legends about the origin of amber:

1) The myth of Phaethon. Once the ambitious Phaethon, the son of the sun god Helios, deciding to show his coolness and importance, stole the sun chariot from his father and began to rush across the sky. But he lost control and almost burned the entire Earth to ashes. Enraged Zeus knocked down the insolent man with lightning. The defeated Phaethon fell into Eridan (the ancient name of the Baltic Sea) and drowned. Since then, the inconsolable sisters of Heliada have been incessantly mourning the death of their brother, and their tears, hardening in the depths of the sea, turn into amber.

2) A romantic legend about Jurat and Kastytis. The beautiful goddess Jurate lived carefree in an amber castle at the bottom of the Baltic Sea. And all would be fine, but fell in love with an ordinary earthly guy Kastytis and carried him along to the underwater castle. But the forbidden romance was not long. Perkunas found out about such an outrage and, according to tradition, killed Kastytis with lightning, destroyed the castle, and chained the goddess to the ruins. Many years have passed. The immortal goddess is still crying over the body of her beloved, and the sea brings to the shore either the fragments of the castle or the frozen drops of tears…

1) In fact, amber is not a stone, but the fossilized resin of ancient conifers

3) The weight of the largest amber in the Amber Museum in Kaliningrad is 4, 280 kg

4) More than three hundred amber colours are distinguished, which in various combinations make each stone unique

5) In Ancient Greece, amber was used as an incense, and in Russia it was called sea incense. In China and Japan, red amber was prized and considered the blood of a dragon.

6) The famous Amati and Stradivari violins were covered with amber varnish.

7) The largest and most famous amber product is considered to be the original amber room, made back in 1709, located in Tsarskoe Selo

9) Thanks to the precious “history keeper”, paleontologists have been able to discover more than 1000 extinct species and recreate a picture of the early period of life on Earth.

10) In the science fiction film «Jurassic Park», scientists were able to extract dinosaur DNA from the blood of a mosquito imprisoned in amber, which managed to bite the dinosaur during its lifetime

I really liked the excursion that I visited in this museum, learned a lot of new and interesting things about the mysterious “sun stone”. An informative museum that allows you to get an idea of ​​amber and the methods of its extraction and processing from ancient times to the present day. There is something to see here for lovers of history, jewellery and even mysterious theories. Of course, you can try your luck in the extraction of amber for this you just need to go to the coast of the Baltic Sea in the Kaliningrad region. I highly recommend visiting the Amber Museum if you are in Kaliningrad.