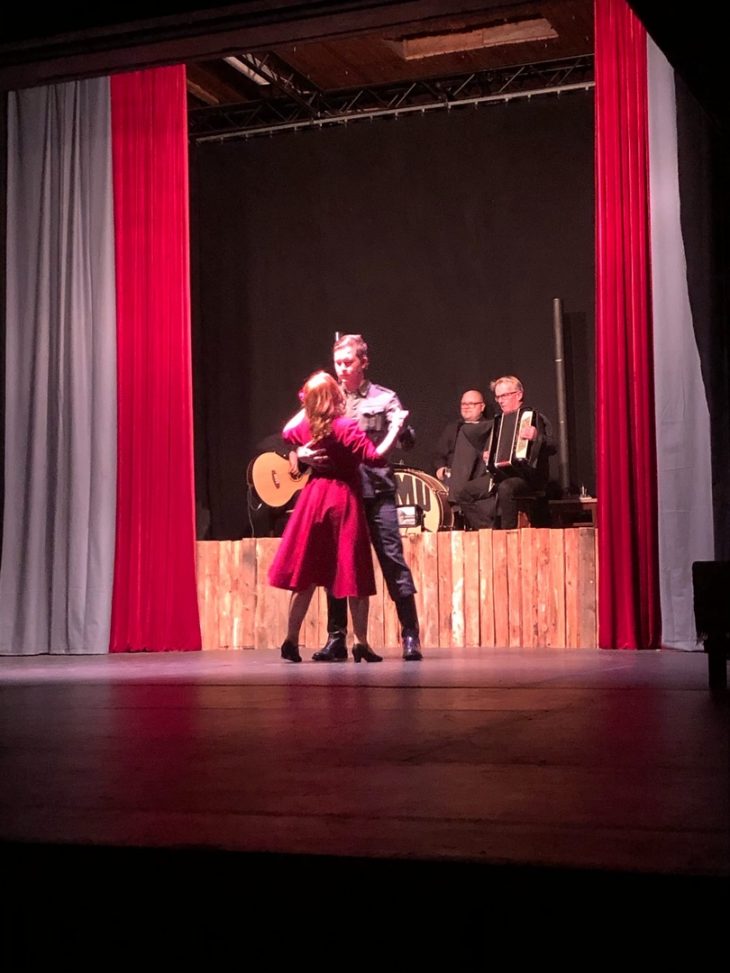 This musical performance takes place at the Anjalankoski theater in the area of Myllykoski (15 min drive from the centre of Kouvola). The theater has been open since 1978, it is chamber and quite comfortable. Musical accompaniment is performed by a chamber ensemble throughout the musical. The musical, a passionate tango dance that needs to be supplemented with music and songs, tells about the life of the 1940s, about the war and its consequences. The influence of time on the everyday life of the average person, which is full of intense contradictions, sorrows and joys, the pulse of life and, ultimately, humiliation. Most of the play takes place in a bar and in the house of two sisters. Unusually, most of the actors are already quite old. The performance is in Finnish.

Two women who work at XAMK are also involved in the musical: Seija Kiuru-Lavaste and Jutta Tuunanen.

The performance begins with the sad moment of the funeral, where the grouchy old woman (mother of two daughters) continually, scolding the deceased. However, the plot is quite simple, there lived 2 sisters who are in love, with one man named Joonatan, he is a singer. Joonatan is quite loving, meets an older sister (Silja), wants to marry a younger one (Elli). Parents of sisters, strongly against the marriage of Elli and Joonatan. Time passes, the younger sister admits from whom she expects a child, after a frank conversation with Silja. Elli decides to leave, at the station 3 Germans harass her and try to rape a pregnant woman, but the older sister manages to come to her aid, but it was already too late for her sister to have a miscarriage and she lost her baby.

The war begins, Joonatan goes to the front, falls in love with a young girl there. Joonatan and Hilda meet in the evenings in a restaurant, drink, have fun. One evening, a notice of the end of the war finds lovers in a restaurant, gentlemen invite ladies to a dance, and young lovers dance a passionate dance – tango. While he was at the front, the older sister told the younger one that she had a child and that she would give the youngest child so that she would raise him as her own. After Joonatan returns home, they, along with Elli, raise their “own” child. And the older sister, from worries about her family, the fate of her sister is more than her own, because of her unreceived love and happiness, she decides to throw herself under the train. Years passed, the father of the sisters accidentally learning about the love affairs of Joonatan at the front, his betrayal of Elli, decided on a very terrible crime, to kill Joonatan. He came to a restaurant where Joonatan sang and in front of visitors he shot a pistol. After the performance itself, I managed to get to know and talk a bit with the performer of the role of the elder sister – Minna Sipinen. I remember it and liked it the most, so I was very glad to meet her! I really liked this musical, I will definitely go to it again! I advise everyone to go to it, you will not regret it!