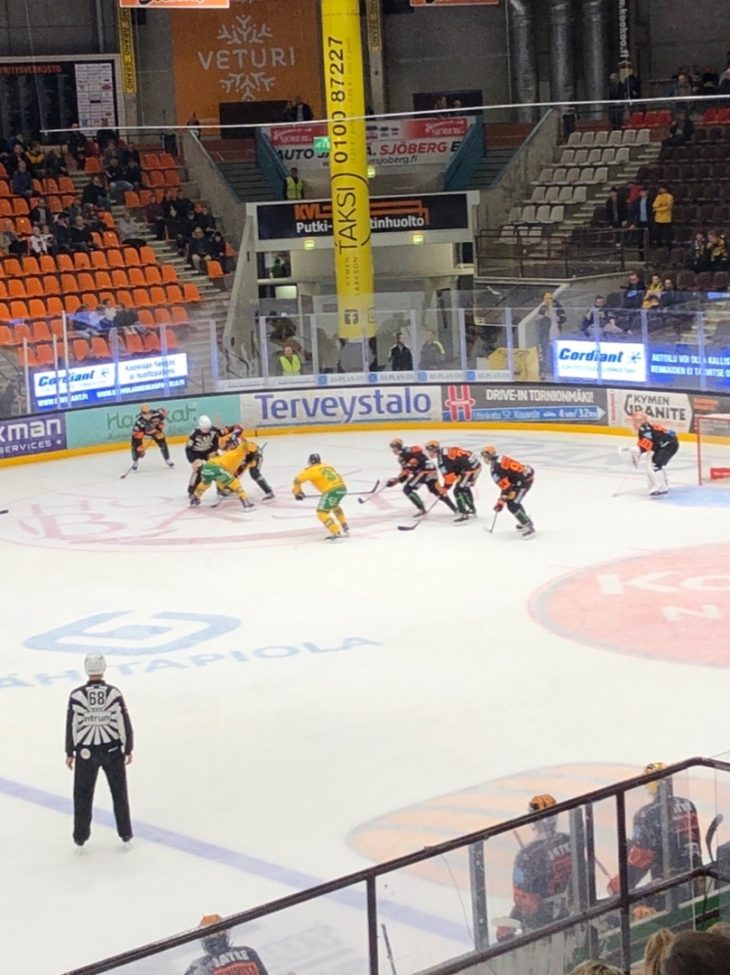 Last Friday 11/10/2019 in the home arena in the city Kouvola, KooKoo hosted ILVES as part of the Finnish Hockey League (Liiga). It was the second match in the home series. After victories over SaiPa and HIFK, our team moved to 7th place in the table. The opposing team does not have such a positive result, only 12th place. Our team came out as a favorite for this match, and had good chances to extend the win-win home streak. ILVES came to win and score the necessary points, and for our team this match was a kind of stability test, since playing in the home arena is not so easy from a moral point of view, plus a lot of responsibility, but as they say “At home and walls help”!

The beginning of the first half turned out to be rather ambiguous, it was clear that both teams were nervous. The match took place mostly in the middle zone. There were some serious violations on the part of the opponent (for example, in the 4 minute of the match, number 48 – Joose Antonen went to the penalty box for 2 minutes for violation of the number of players). KooKoo got an advantage. The stands, because of all their strength, began to support the team! Alas, our team was not able to realize the majority.

At 10 minutes, the opposing team carried out two rather sharp attacks in our zone, but our guys were able to give a tough fight back! After another attack on our goal in the 12th minute, a player of our team, (number 6 – Peetro Seppälä received a two-minute penalty for rudeness). KooKoo remained in the minority, the opponent also could not take advantage of his advantage. And then it turned out as usual in hockey. Having restored our equal squads, the team missed a counterattack, allowing a beautiful wrist throw to score (number 10 -Eemili Suomi, from number 22 – Arttu Ruotsalainen and number 72 – Matias Maccelli). The score now stands at 0: 1!

The second period began with reciprocal shots on goal and beautiful rallies of combinations. Further, the opposing team committed a number of gross violations (the first removal was number 70 – Niko Peltola, the second removal –number 11 – Tuomas Salmela; both 2 minutes). The game started 5 on 3 and almost immediately our team was able to make a confident attack and score the puck (from the transfer of number 8 – Matthew Caito and number 94 – Anrei Hakulinen; threw the puck number 12 – Kim Strömberg). The score now stands at 1: 1! Equalizing the score, our team began to play on hold, allowing the opponent to easily enter our zone. Our team got nervous and began to break the rules until the end of the period we got 4 deletions against 1 from the opponent. Until the end of the period washers were no more abandoned!

The third period began with the removal of the opponent in the team (number 70 – Niko Peltola), and the first face-off won in the opponent’s zone led to a powerful blow of number 9 -Trevor Mingoia, the puck, passing between the legs of the goalkeeper, slowly flew into the opponent’s goal. Hurrah!!! 2: 1! Up to 57 minutes, our team attacked more, and there were some deletions. And in 58 minutes after the timeout, the opposing team decided to remove the goalkeeper, hoping to equalize. But the score remained unchanged. KooKoo celebrated victory in the home series. The goalkeeper of our team traditionally thanked the fans after the victory (He holds the stick on his head, it looks very funny!) Jumping ahead, the series was extended by Kookoo fourth victory in Lahti, defeating the Pelicans 5: 1!