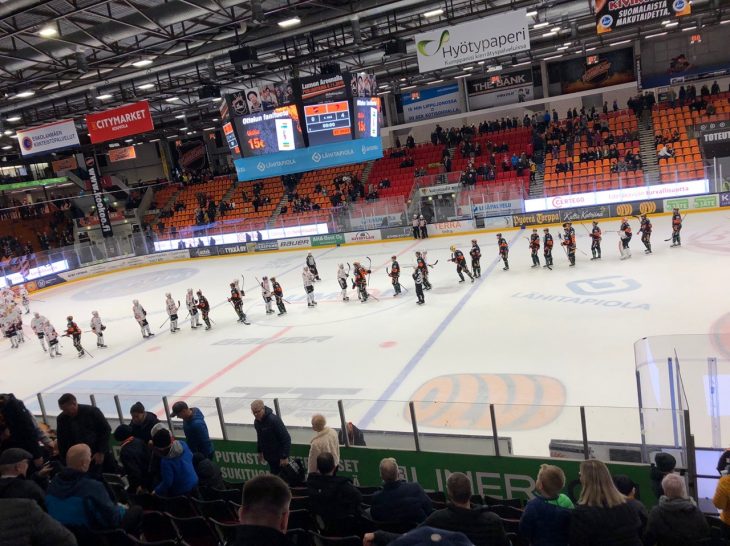 Last Saturday, the final match of the autumn series KooKoo lost to the team of guests from Jyväskylä. KooKoo is currently ranked 5th in the standings, scoring 29 points in 18 games in a series. I want to note that, unfortunately, the opposing team in this match showed a game of higher quality than our team. There were 3843 people at the match. At the beginning of the match, our team player Toni Kärhönen (number 85) was congratulated on the five hundredth match in Liiga!

Forward to the match. From the first minutes of the match, the Jyväskylä team began to enter our zone quite actively, making sharp shots on goal. Forcing ours to make ridiculous mistakes in defense. I can note, that our goalkeeper was able to reflect all the throws of opponents. Of course, ours also tried to carry out attacks on goal of the opponent, but they were unsuccessful. At the 5th minute of the match, our team had a chance to realize the majority, as the opponent’s team player 3th number – Anttoni Honka violated the rules (puck delay). However, the opponent stood very tight in defense. Attempts by our team have been fruitless. On the 6th minute the removal earned our 85th number – Toni Kähkönen (playing with a high club). Nerves were at the limit that even with a throw-in, the puck flew into the stands (just where I was sitting). The ending of the period was even more aggressive and sharp. Our team noticeably began to play more on the defensive, on the sides, to make more frequent link changes. It seemed that ours would have reached the ending in the minority, but with tight defense, but after a well-played combination of the opposing team of number 3 -Anttoni Honka and passing 52 numbers – Petros Palmu for a shot from the middle line, the goal was scored by number 6 – Julius Honka. The score now stands at 0:1!

In the second period, the opposite picture was observed. Ours began to conduct an active attack in the opponent’s zone, tried to play combinations. The opponent noticeably began to get nervous, as a result of this after a hard attack and the delay of our player, number 51 – Alex Lindroos earned a two-minute removal (for delaying the player). The score has remained unchanged!

The third period was the most difficult for our team. The teams were still tense. At 42 minutes, our team’s 40th number was Martin Berger (for a blow to the arm). The opposing team did not lose precious minutes of the match! JYP confidently took up positions in our zone, having beaten our three players, made a wrist throw number 26 – Jarkko Immonen. The score now stands at 0: 2! At the 46th minute, our team again made mistakes in defense, allowing us to make a successful throw to number 52 – Petrus Palmu, from about the same point as when throwing the first goal. The score now stands at 0: 3 in favor of JYP.

Our team, unfortunately, completely pasted the game in the end. The deletion followed one after another, mutual (number 40 – Markus Berger (KooKoo), and number 27 – Miska Siikonen (JYP)) for two minutes for being rude. After 2 minutes, the removal of 5 numbers – Juuso Vainio (JYP) for the bandwagon. The head coach of our team decides to take a timeout to try to change the situation. It was decided to remove the goalkeeper, despite the fact that our team has a player on the penalty box. It seems to me that this was an irrational decision to remain without a player, and without a goalkeeper. As a result, 4 goals were thrown into the empty net! 0: 4! The match is over, victory of JYP!