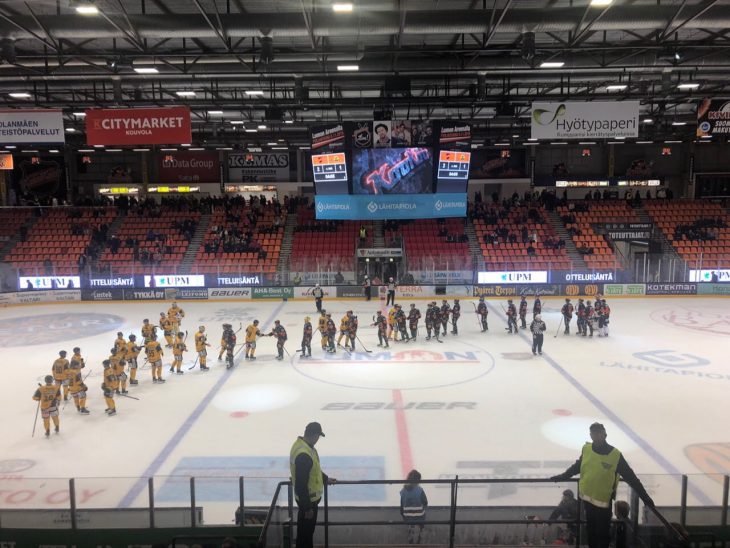 Last Wednesday, 02.10.19 in the home arena in the city of Kouvola, Kokoo hosted SaiPa as part of the Finnish Hockey League (Liiga). At the moment, KooKoo, after several defeats in a row, takes 13th place, while SaiPa today takes 11th place in the standings. Since these teams are not far from each other in the table and the points scored in case of victory are important to them, the match promised to be spectacular and interesting!

The first period ended with a score of 0: 0. The game was fairly smooth, not without deletions in both teams. SaiPa has one deletion in the 5th minute (number 44 – Jere Sneck) and 7th minute with KooKoo (number 18 – Joonas Oden). But, the teams could not realize the majority.

At the beginning of the second period, the Kouvola team distinguished themselves, after setting up a coach, they began to actively conduct the game of attack in the opponent’s zone. At the 27th minute, KooKoo unfortunately remained in the minority of 40 number – Martin Berger went to the penalty box for 2 minutes for the bandwagon.

And  in the 29th minute after an excellent rally, the combination with the transfer of 6 numbers -Petrj Seppälä and 8 numbers – Matt Caito, the 9-Trevor Mingoia scored a goal into the goal of SaiPa. 1: 0 led KooKoo! SaiPa did not intend to give up and after 2 minutes he throws the puck into KooKoo’s goal from the transfer of 72 numbers – Elmeri Kaksonen and 16 numbers – Jere Seppälä, the puck scores 51 numbers – John Persson. The score now stands at 1: 1! Throughout the second period, the teams carried out rather sharp attacks. At the 35th minute, KooKoo gained an advantage in the lineup, after removing 16 numbers for 2 minutes – Jere Seppälä, the ending of the 2nd period the game was played 5 on 4. I want to note that this period was remembered for a large number of attacks, both from the hosts and the guests.

At the beginning of the third period, it was seen how SaiPa began to actively enter the KooKoo zone and strike on goal of the hosts. KooKoo tried to keep the defense, and use the opponent’s mistakes to conduct effective attacks. In the third period, the SaiPa player 21 number – Matias Mäntykivi earned a deletion in the 44th minute. But the score has not changed, despite all the efforts of our team. The game flowed smoothly into overtime.

It was clear that our team was focused on the opponent’s goal. And already at 61 minutes of the match, luck smiled at us, with the transfer of 9 numbers -Trevor Mingoa and 55 numbers – Vilmos Gallo scores the puck and brings victory to our team number 41- Oskari Manninen! KooKoo 2-1 win! The match is over! After the match, our team thanked the fans for their support!

After the match, the traditional press conference of the team coaches Pekka Tirkkonen and Tuomas Tuokkola was held, the results of the meeting were summarized, the coaches thanked each other for the tense match, the teams fought with each other with dignity, but the victory was on our side!

Until next time, watch and love hockey!