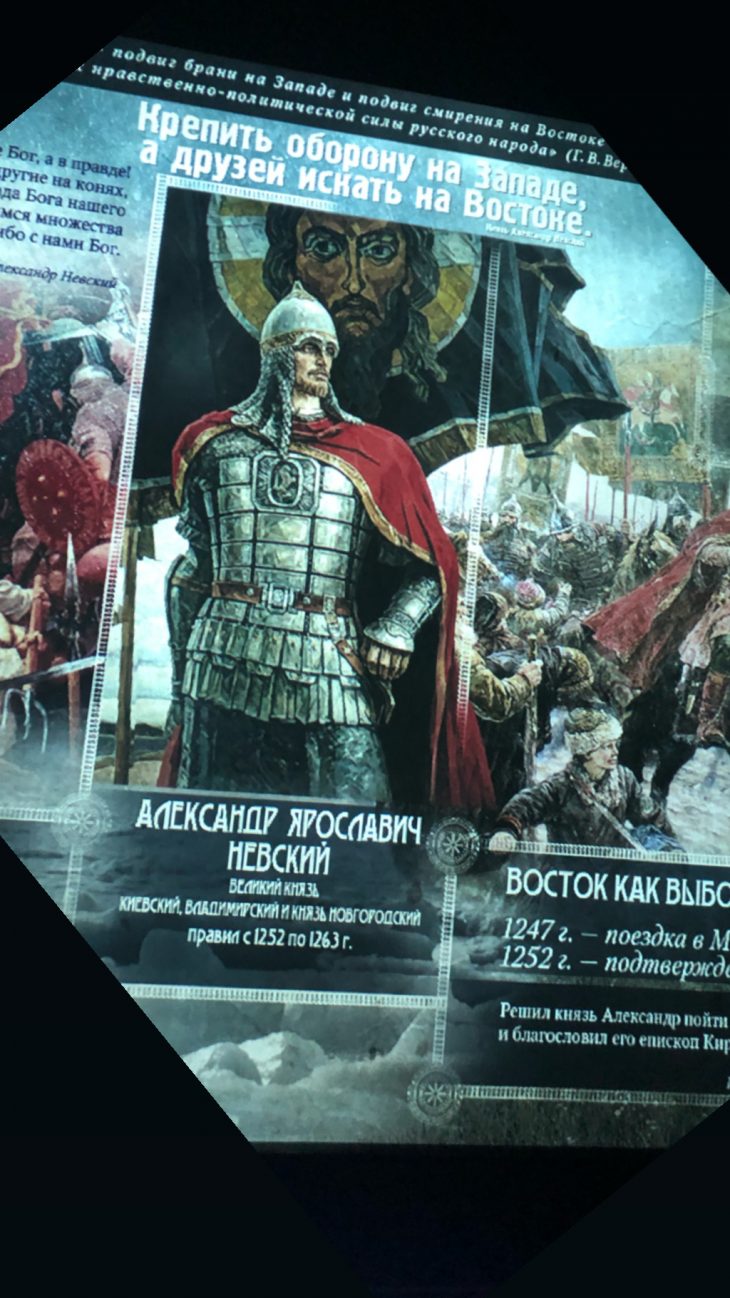 Christmas and New Year holidays have ended. During the holidays, I finally managed to visit a very unusual museum, whose name is “Russia is my story.” The total area of ​​the exhibition and exhibition space is about 10,000 m², it can receive up to 800 visitors at a time.

This historical park is unique in that the history of the Fatherland is given here panoramically and with the help of modern technologies – expositions include 900 units of multimedia equipment, 11 cinema halls, 20 interactive 3D-carriers with reconstruction of historical events, multimedia maps, a 20-meter Dome with video projection, interactive panoramas and scenery. This museum has been opened in 21 cities in Russia.

The space is divided into two main sections, two main parts of the long and eventful history of Russia: ancient times, the Rurikovich and Romanovs, and modernity (the Great Patriotic War, the Soviet Union, and even the most recent events until 2016).

Visitors can familiarize themselves with interactive maps of the most famous Kremlin of Russia, find out what people are used to eating, where they lived and how they dressed with a fun animated film, or try to read a love letter in the old Cyrillic language. Tours in the museum are held in Russian, English, you can take an audio guide.

For example, elements such as the water projected under your feet, when you enter the section on the Christianization of Russia, create the feeling that you are really “walking” through the history of Russia.

Before visiting the museum in the main hall there was a thematic exhibition dedicated to New Year’s cards (from 1906 to 2019), it was possible to choose any one you liked for free and send it to your friends and relatives. I also decided to send a couple of postcards to my friends and parents. Of the two sections of the museum, I decided to start from the very beginning, so I visited the Rurikovich section. I learned a lot of interesting facts about the origin of which I had not previously known, for example, that knitting is a man’s business, it is connected with the fact that in ancient times this work fell on men’s shoulders, since in monasteries where there were no women, all the work, including making vestments, embroidering diapers, was performed by monks. Also, the creation of woolen sails, exclusively engaged in men. It took more than one year to make a sail. Or, for example, the meaning of “Belt Passport”, in Russia, a belt was a kind of identification card of a person by its ornament, it was possible to determine from what locality his master was, how old he was. Men removed the belt only when going to the bathhouse and at night, while women did not wear the belt until the 18th century. But a person who behaves inappropriately said that he allegedly does not have a belt, which means he “unbelted”. So they say to this day. Also, this interactive museum helped me recall the material that I studied in high school, as I went through this era, I asked questions that I could not find a definite answer for myself. It was very interesting to watch the iconic battles on the interactive stand, having examined, in detail, the number of soldiers on both sides, the strategic location of the troops, clothes, weapons, etc. Browse through interactive books, select and view from different angles the most famous fortresses of that era. In the huge domed hall, sit on the sofa, listen to the Orthodox chants of the choir or watch any of the 15 documentary, historical films to choose from. Participate in an interactive quiz after visiting the museum to memorize viewed and listened material.

Being there, you really get the feeling that you are traveling in a history textbook from era to era, getting acquainted with life, traditions, learning new interesting facts, and seeing how significant battles took place in the history. This is breathtaking! I highly recommend everyone to visit this museum!