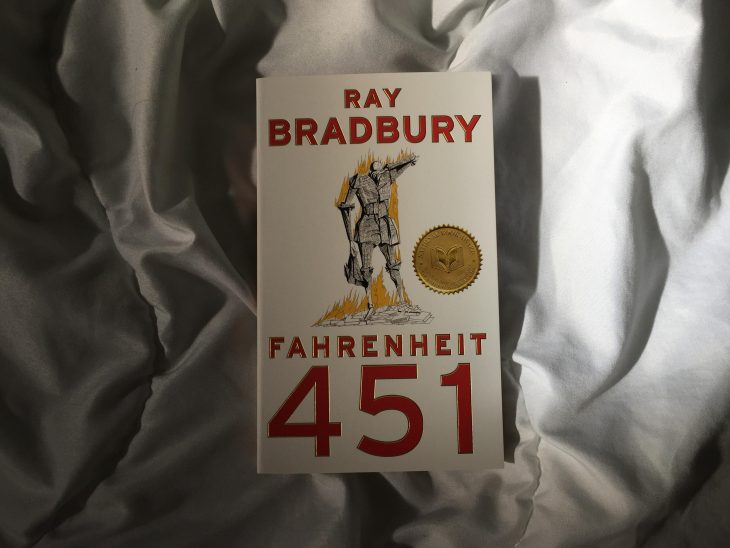 “Fahrenheit 451 – the temperature at which book paper catches fire, and burns…”

This is an unusual book which discusses issues being set years in the future, by the author Ray Bradbury. As I read the book in the comfort of my dorm room, with music playing softly on my laptop and Messenger notifications kept popping up on my smartphone, I realized the future which is being presented in the novel itself is not too far back from the possible reality ahead. The novel depicts a society where books are strictly banned, in which firemen, instead of putting out fire, are the ones who are in charge of burning the books and the house where they are stored. It tells the story of Montag – a fireman with years of experience in destroying the outlawed books, found himself in a questionable position after one unexpected encounter with a whimsical young girl. He began to skepticize his and everyone’s lifestyles in a paperless world, where machines and so-called advanced technology have full control over people’s actions and morals. Montag went through a process of doubting himself, risking it all in order to find the truth and witnessing this sullen society under the horrid influence of the government.

The novel started out pretty hazily and uneventfully, most of it was meant to depict the unfamiliar future through the imaginative mind of the author, since Fahrenheit 451 was published in 1953, a time where technology still hasn’t had such massive effect on people’s lives. However, as the story goes, the novel soon becomes an action-packed, twisted read. What I find most confusing is how Fahrenheit 451 left behind a handful of questions, but overall, this is a must-read for everyone who enjoys a mind-opening book with a humble writing style. This is considered one iconic work of Ray Bradbury, even years after it was first published.