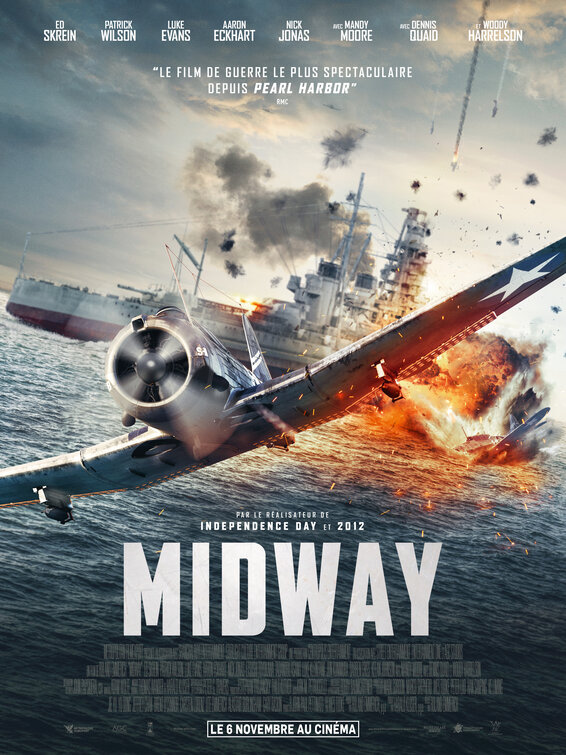 This film is a re-tells the story of the events in the first months of the War in the Pacific beginning with Pearl Harbor and culminating in the Battle of Midway (June 1942). In between, it also touched on Doolittle’s Raid on Tokyo (April 1942) and the Battle of Coral Sea (May 1942). The story was told mainly from the point of view of two American soldiers, namely pilot Lt. Dick Best (Ed Skrein) who led his dive bomber squadron at Midway, and intelligence officer Lt. Comm. Edwin Layton (Patrick Wilson) who with his code-breaker team predicted the Midway attack.

Along the way, we meet other American soldier that are supposed to be famous, I had to research them tho: Admiral Chester Nimitz Commander in Chief of the US Pacific Fleet; Vice Admiral William “Bull” who led the aircraft carrier USS Enterprise; Rear Admiral Raymond Spruance who took over the Enterprise for the Battle of Midway; Best’s fellow aviators Lt. Comm. Wade McCluskyLt. Comm. Eugene Lindsey and Lt. Comm. Jimmy Doolittle; cryptographer Commander Joseph Rochefort and Aviation Machinist Mate Bruno Gaido .

The side of the Japanese Imperial Army and their unique military culture were also given fair screen time in this film. Admiral Isoroku Yamamoto of the Imperial Japanese Navy and the Commander in Chief of their combined fleet, was portrayed with calm and quiet dignity. We also get to meet other Japanese officers and their own brands of leadership Rear Admiral Tamon Yamaguchi who commanded the Hiryu with nobility, and Vice Admiral Chuichi Nagumo whose controversial battle decisions had negative impact against the Japanese campaign.

The execution of the critical battle scenes are the main draws to watch this film. Director Roland Emmerich will always be remembered as the man who brought us “Independence Day” and 2012. Of course, there are big explosions and massive destruction here as well. The massive scenes showing fiery exploding seacraft and aircraft were rendered with awesome cinematography and meticulous visual effects to create impressive screen spectacles. The aviation scenes, particularly the dive bomber runs by Dick Best, were excellently staged, shot and edited to elicit an exhilarating rush.

For its 2 hours 18 minute run, the story of the crucial naval battles and the heroism of its real-life protagonists were front and center here in “Midway.” There were no fictional characters or cheesy love stories like in the first “Midway” film or “Pearl Harbor.” While seeing some popular young actors like Criss or Jonas can be distracting, the all-star cast generally rendered honor and respect to the heroes they portrayed. Focusing on soldiers of lesser rank allowed for some intimate personal drama in actual battle situations, perhaps with not much depth as possible. As this movie is rated PG, so do not expect to see graphic injuries at the level of “Saving Private Ryan.”