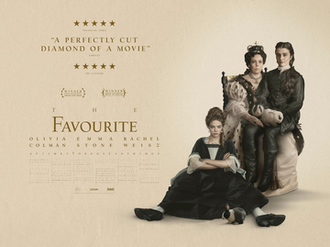 Hope for a better story

This week, a new perspective arrives on the movie review. To be honest, I wanted my first review to be a positive one. So, I want to start with all the positives about The Favourite.

Certainly, the cast. As a person that values the skills of the stars, this movie is certainly highly appreciated. Especially, Emma Stone had an outstanding performance on the movie. Rachel Weisz and Olivia Colman are certainly worth mentioning. I do not remember a movie that is about royals and it would feel so sincere, and real. Queen Anne (Olivia Colman) was actually a human being with feelings which we do not often see in historical movies. By the way, the reason we talk about only three actresses is that there is not many of them. The whole movie is between those three people and others are just like figures who come and go every now and then. It was a movie that was made in almost one place, with very limited numbers of people. This is probably for keeping the costs at some level, but it was not disturbing at all. The costumes of the movie were very well done as well. All the characters had their own style and it was very well made.

I do not know if people are interested to know about technical issues, but I will cut them short. This movie was exceptional. The Greek director, Yorgos Lanthimos, has put some effort in this to make the best out of it. And I would like to thank him for that. Let’s hope to see he does this with a better story.

But then, we must talk about the music. At first, Somehow, I thought this was a musical show because of the constant music ripping our ears. A haunting music from start to end. Literally, I had to put my earphones on and listen to some good music right after the movie to clear my mind from that torture.

As you all can see, I have not talked about the story and most of the review has passed. That is because I do not want to talk about it. This is about two cousins that want to become The Favourite of the queen. Abigail, (Emma Stone) is a smart woman trying to become someone important again. Playing mind games with people around her. Was she successful? I do not want to spoil the movie for the ones that want to watch it. Sarah, (Rachel Weisz) is already The Favourite of the queen and she wants to keep it that way. She is also smart and leading England on the decisions about war against France. She has few rivals in the palace and this makes life hard for her. In the end, I pledged my 119 minutes for this movie and when it ended, I was wondering if this was worth it. And I decided that it was not. Two girls playing games against each other around the queen trying to impress her. I think all this effort were wasted on such a boring story. Overall, I do not think you will be happy for your time spent after you watch this movie.